This tool allows an easy and comfortable way to download genuine Windows 7, Windows 8.1 and Windows 10 disk images (ISO) directly from Microsoft's servers, as well as Office 2013, Office 2016, Office 2019, and Office for Mac.

In the past, Microsoft provided disk images for many of their products through their subcontractor "Digital River". These downloads were pulled in early 2014. Afterwards, Microsoft made a limited selection of downloads available on their TechBench site. Our tool is based on TechBench, and makes a range of hidden products available for download.

Support: For any support issues, please use our support forum. Current bugs and issues are usually already addressed in the forum, and don't need to be raised by email or Facebook. 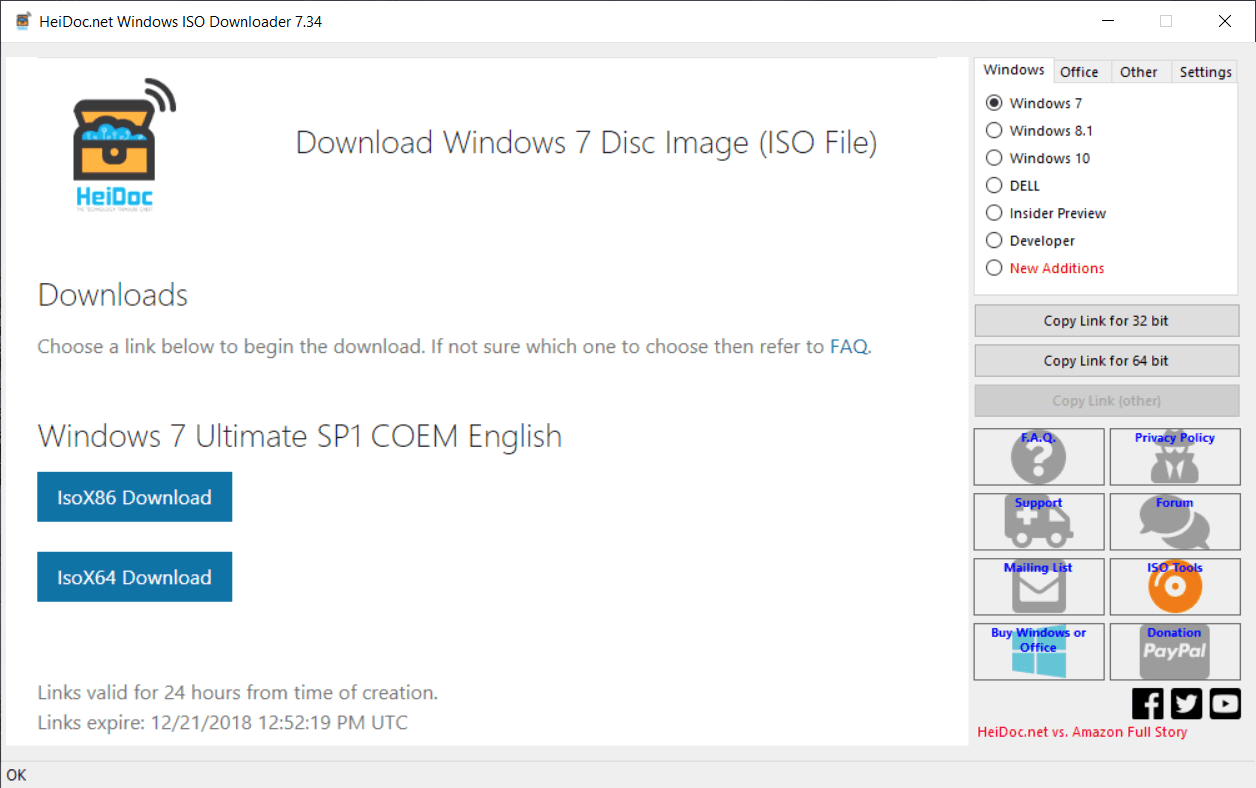 Big thanks to all volunteers who have contributed translations. This is a list of all supported languages, and their contributors.

We are currently looking for volunteers to review and update the language files. Volunteers get added to the below list, and also receive instructions how to remove the ads from the downloader for free. Languages required: Arabic, Bulgarian, Croatian, Danish, Estonian, Finnish, Hebrew, Hungarian, Japanese, Korean, Lithuanian, Polish, Portuguese (European), Romanian, Slovak, Slovenain, Thai, Ukrainian. We can't add other languages due to technical restrictions.

If you contributed translations in the past, but have not yet received instructions on ad removal, please get in touch.


Purchase a Windows or Office Key

Do you still need a key for your download? Here are some links to good deals for Windows and Office keys from vendors such as Amazon, eBay and Microsoft. If you buy from 3rd party vendors, make sure not to buy and pirated products.

Q: Why have you integrated ads into the downloader?
A: The cost for keeping the service up and running needs to be covered. See this forum discussion for details. The ads module is only active while you run the downloader, and does not install any components permanently on your computer.

Q: I'm getting the message "This file is currently unavailable. Please check again later."
A: The file can't currently be made availabe. The number of different downloads for Windows 7 and Office 2010 that we can offer at the same time is very limited. The files to be unlocked next are determined by community demand. Currenty available downloads are highlighted in green. You can wait until your file becomes available again, or alternatively download the Windows 7 August 2018 update, or one of the DELL OEM images.

Q: I'm getting the message "We encountered a problem processing your request. Please try again later."
A: Fetching the download links from Microsoft has failed. This error message originates from MS, not from HeiDoc. You can try again later.

Q: I can't find some Windows and Office editions and languages that were available in previous versions.
A: Office 2007 had reached the end of its life cycle, and will not return. Microsoft has restricted the download options for Windows 7 and Office 2010. We have brought back the most important versions. If you feel there's a specific edition or language missing, please consider donating a suitable product key to us to integrate it into the downloader, so that you and other users can benefit from having the download continuously available.

Q: Can you include Windows Enterprise/Server/Vista etc. in the download selection?
A: All editions that Microsoft makes available are included. Should Microsoft decide to make the other editions available at a later point, they will also be added to the list.

Q: Can you include additional languages in the download selection?
A: All languages that Microsoft makes available are included. Should Microsoft decide to make more languages available at a later point, they will also be added to the list.
Additional Windows 7 editions and languages can be unlocked by removing the file ei.cfg from the ISO image. This can be done via the ISO tools from within the downloader.

Q: Where can I find untouched files for the systems that are not included?
A: There are no free and legitimate download sources for them. If you wan to go for an unofficial download source, you might want to verify that the hashes match with those provided by Microsoft. Please check our hash database for the original hash values.

Q: Can you include other software such as Adobe?
A: No, this tool is dedicated to Microsoft products only.

Q: I'm experiencing one of the following symptoms:

A: This is your local connection issue, and can have a number of root causes:

Q: After selecting a language, either nothing happens, or the tool displays error code 715-123130.
A: This happens when Microsoft's server has blocked your IP address from downloading any more files. Wait at least 24 hours, then try again later. It might also help using a different online connection, and/or a different computer, and/or signing into microsoft.com with a different Live ID.

Q: Can you provide a tool for Firefox or Chrome?
A: Plugins for those browsers already exist. Please use Google to find them. Some downloads can be accessed by faking the user agent string.

Q: Can you provide a tool for .NET 2.x, 3.x, or older IE versions?
A: No, we don't have the resources for creating that many versions. All Windows editions that are still supported (Windows 7 or newer), can run the download tool. You might need to update your Internet Explorer or .NET version to make it work.

Q: I'd like to contribute a translation to the download tool in a language that's not on the list.
A: Thank you for your offer to help. The download tool integrates content from microsoft.com that's not available in your language. Localization is therefore currently not possible.

Q: I don't know which file I need to download for my Windows edition.
A: Please disable the "expert mode", which will leave the file that you most likely need in the download selection.

Q: How can I install Windows from a USB drive?
A: We recommend using Rufus for that.

Q: Does the tool pick up aborted downloads?
A: No. If your internet connection is unstable, we suggest pasting the download link into a download manager.