In this part, we're examining the Kindle ecosystem, and show you some options how you can move away from Kindle to alternative eBook vendors without losing your Kindle library. Moving away from Kindle can save you real money too. We did some spot checking and comparing of prices of some randomly selected books to prove this point.

You're probably also waiting for verdict of the arbitration tribunal (called an award in legal language), which will follow in the next post in a few days. I can say so much: it was expensive for Amazon.com. But since Black Friday and Cyber Monday are approaching rapidly, now is the time to dump Kindle for somthing better, and make use of possible deals over the weekend.

Does Kindle really have such great advantages?

The two possible advantages that come to my mind are the big selection of books, and the low price. Let's examine the selection of books first. Amazon does have more books than their competitors in terms of number indeed. But keep in mind that this selection is large in quantity, not in quality.

Have you ever bought a book for Kindle which turned out to be of such low quality that it could have been written by a third grader? I dare say, everyone who buys Kindle books regularly has made this experience at some point. There's only a minimum of curation and quality control, and everyone who feels like being an author can submit their manuscripts to the Kindle store through KDP (Kindle Direct Publishing). This is generally a good idea, but Amazon mingles KDP titles together with proper books in the same store, together with huge masses of hundreds of years old public domain titles that no-one really is interested in any longer. So there is the appearance of a large selection, but the "proper books" are just the same ones as in any other eBook store. And all the the pubic domain books are available from Project Gutenberg for free anyway.

Then there are all the free books for Kindle, probably more than in any other eBook store. And frankly, I encourage you to continue getting free books for Kindle. It's a great way to sample new authors, and give indie KDP authors the opportunity to impress you. Not all of them write like third graders, and you might discover true gems among the masses. Just when it comes to buying an eBook for money, you should compare prices, and make an informed decision.

It has been said that Amazon subsidizes the Kindle devices, and gives them out at a much lower price than the actual production cost. Therefore, let's compare a Kindle device with the Likebook Mars, which is not connected to any proprietary eBook store, but can install reader apps for most of the major stores (such as but not limited to Google Books, Kobo, Tolino, ebooks.com, and also Kindle), and even formats that are not available on Kindle, such as comics.

I've made a video review of the device, showing that it is in fact a lot more powerful than a current Kindle device that costs about the same money.

If you already have a large Kindle library, you can easily copy it onto this device. If you love free Kindle books, you can use the Likebook to buy and read them. And it opens all other ecosystems to you as well, so that you're no longer restricted to Kindle at all. Therefore, the myth that Kindle devices are cheaper than other readers is busted.

Books are more expensive on Kindle than elsewhere

We compared prices for three randomly selected books (the last book that I bought personally, the #1 bestseller, and one random pick from new releases). It is important to consider that Kindle book prices are not uniform for all customers. Don't assume that you pay the same price for your Kindle books as your next door neighbor. I have no idea which factors are relevant for Amazon to make up the prices, but I've been involved in forum discussions in which multiple people shared their screenshots, and I can confirm that price differences can be massive, even when comparing Kindle price with Kindle price. Don't assume Amazon will give you the best price. They will probably give you the price they determine will make them the most profit. For the price comparison here in this blog post, I'm using the prices that Amazon.com gives me when logged into my own account.

For all three books, we've compared the prices across six major eBook stores. Prices were accurate on Wednesday, 14 November 2018. 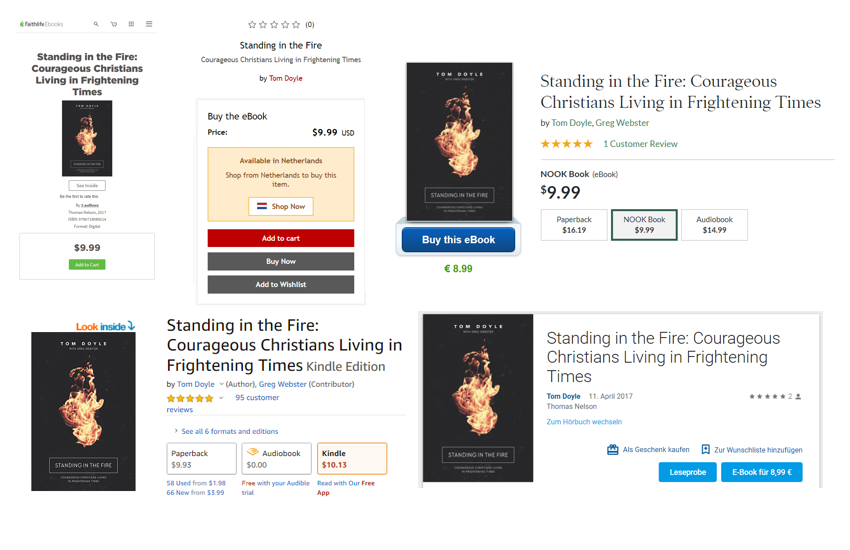 Standing in the Fire by Tom Doyle: This book was available for $9.99 on Nook, Kobo and Faithlife. On Google Books and ebooks.com, a price of €8.99 was shown, which converts to $10.15. Amazon.com was the most expensive store at $10.29. This is just 3% more expensive than the cheapest offer though. The Amazon price dropped to $10.13 within the few minutes between the price comparison and the taking of the screenshot. So technically, in the end, it was two cents cheaper than the most expensive store. 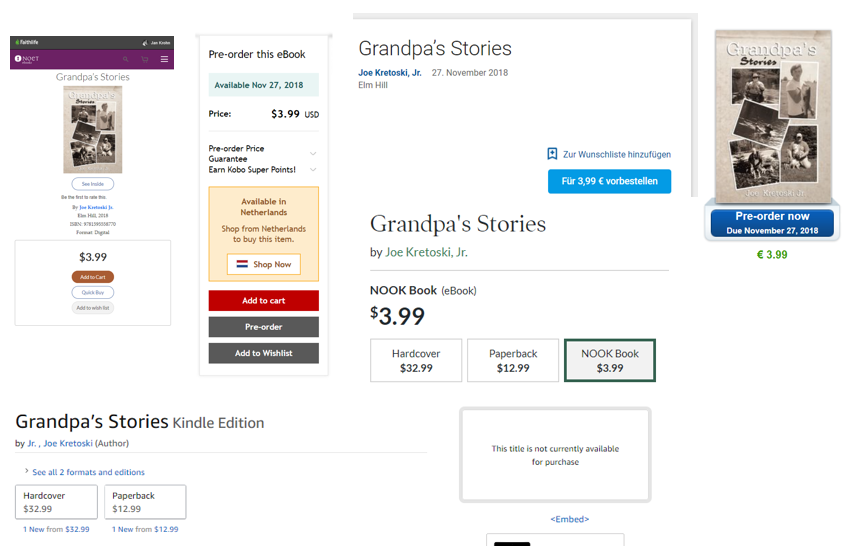 Grandpa's Stories by Joe Kretoski Jr.: Noet (a division of Faithlife) was the only store that had the book immediately available for $3.99. Nook and Kobo had it on pre order for $3.99, and Google Books and ebooks.com for €3.99, converting to $4.51. Amazon did have a product page, but the book could not be pre ordered, and showed as not available for purchase. The question is, whether it will become available after the release, but any potential pre order discount would be forfeited. So Amazon.com clearly lost this one as well. 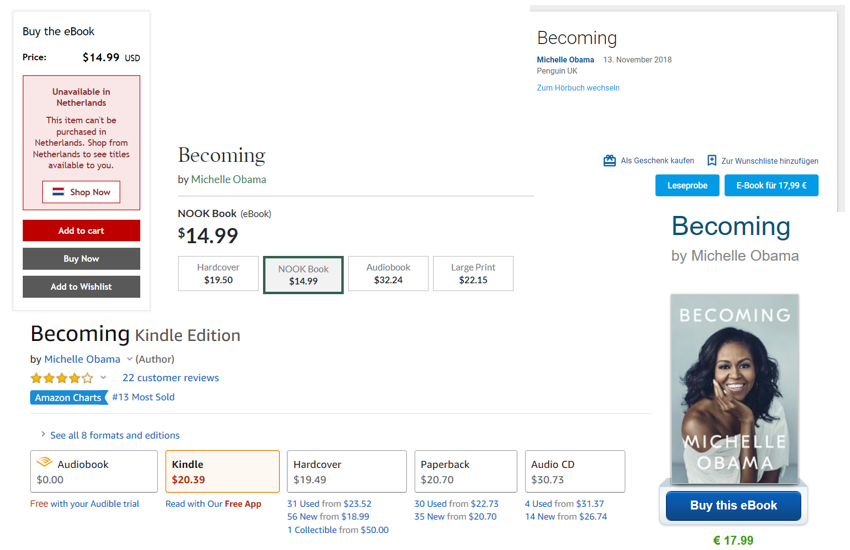 Becoming by Michelle Obama: Faithlife doesn't have this title for sale. The cheapest offers came from Nook and Kobo at $14.99 each. Google Books and ebooks com charge €17.99, which is about $20.36. Amazon.com is again the most expensive store, and sold the book at $20.39, a whopping 36% more expensive than the cheapest stores.

Conclusion: After you have bought about 40 books like "Becoming" on Kindle, the accumulated amount of money you have wasted on Amazon.com could have easily been used to buy a device such as the Likebook Mars.

Therefore, don't wait to switch from Kindle to an Android based reader. Each book that you don't buy on Kindle but elsewhere potentially saves you several dollars.